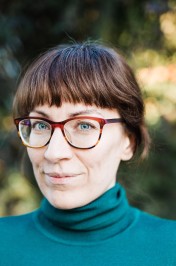 Emily Saso (say-so) writes novels, screenplays and copy. Her voice, dark humour and style have been compared to Aimee Bender and Margaret Atwood. Her debut novel, The Weather Inside, was published by Freehand Books in 2016. In 2018, she won a Toronto Arts Council grant for her second novel in progress.

Emily loves television and movies as much as she loves books. She writes pilots, specs and features, and is a proud alum of the Women on Screen screenwriting incubator, The Summer Institute of Film and TV, and the Comedy Girl stand-up training program.

Emily earned her master’s degree in political science, with a specialization in international security studies, from York University. From Ottawa originally, she now lives in Toronto where she works as a copy and speech writer in finance, higher education, government and television.